“My advice for anyone going through this is to advocate for yourself, seek medical attention proactively and don’t give up.” – Chris W. 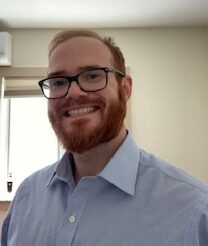 I was working as an analyst in an environmental laboratory and commuting about an hour to work. One day at work I noticed that I had a tick on my thigh. I rushed to the lab, grabbed a pair of tweezers, went back to the restroom and removed the tick. In my haste I quickly flushed the tick down the toilet and then immediately realized that was a mistake. I knew about Lyme disease, but not much, so I decided to watch the area for a rash. I never got a rash, so I never thought to go to the doctor. At the end of that summer, I got very sick with flu-like symptoms which lasted about 4 weeks. I remember thinking it seemed like a suspicious illness, but enough time had passed since my tick bite, I never considered it could be related.

Fast forward to Winter 2019. My commute and work had become increasingly grueling. I felt tired, burned out and simply assumed that it was the result of spending so much time in the car and working in a lab. I spent a lot of time looking down while prepping my samples so despite the ever-growing pain in my neck every time I yawned, I never suspected there was something else at play. Spring of that year, I noticed issues with my vision, lights, specifically LED lights from cars, open signs etc. were creating trails in my vision. Similarly, when I would work with my hands, I would notice a blurring of my hands as they passed in front of my face. I began to get scared when a colleague of mine mentioned a friend who had a brain tumor and similar symptoms. I also noticed that the skin on my hands had become dry, thin and brittle. I was prone to cutting my hands by bumping into ordinary objects. Finally, while on vacation in Columbia my symptoms escalated to a point where I could no longer ignore them. I was having panic attacks, irregular heart rhythms and what seemed like allergic reactions. Upon returning home I visited urgent care after having what I thought was a hypoglycemic incident. A few weeks later the test result came back positive for Lyme.

Despite having an active infection for nearly two years, getting on track to the correct treatment was a blessing. I consider treatment to be the beginning of my story. When I was prescribed antibiotics, I was told that people can go back to work during Lyme treatment. I felt reassured but did some research on my own. When I read about the Herxheimer reaction I was a little nervous that I could be in for a rough time. Within 5 days of my treatment, I had inflammation beyond anything I ever imagined. I felt like there was a basketball growing out of the center of my back. I had chills, rigors, racing heart and I was in shock. This was a theme for the next 18 months. I was debilitated and felt unsafe driving given my vision issues. Despite this, I was unable to get even 2-3 weeks of short-term disability through my employer. My primary healthcare provider refused to recommend STD benefits, because in his experience Lyme just wasn’t a debilitating illness. I was debilitated. And everywhere I turned I seemed to be met with discouragement.

I had been diagnosed and treated for Lyme after committing to a graduate program in chemistry, moving to Syracuse and leaving my full-time job. This was the beginning of the greatest challenge of my life. I was working nights in a QC lab and taking classes by day. My sleep was suffering, anxiety was at an all-time high, and I was having panic attacks, food reactions, abnormal heart rhythms and my gut health was quite poor. I became afraid to leave the house, even to see my doctors because even the trip to the facility was enough to spike my anxiety. There was a time where I was having severe episodes almost daily.

I made some drastic life changes to get things under control. I quit drinking, cleaned up my diet, learned to exercise gently with yoga and began seeing a holistic MD who helped me to fix my sleep.

I finally graduated with my master’s in chemistry and got a job with a leading analytical chemistry instrument manufacturer. I still struggle with fatigue, digestion, and anxiety, but after making some difficult changes in my life I am objectively healthier today than I was prior to having Lyme. My advice for anyone going through this is to advocate for yourself, seek medical attention proactively and don’t give up. Most importantly seek a community of people who understand and can support you, and work toward letting go of the fear which keeps us trapped in our symptoms. I noticed a dramatic lightening of my physical symptoms when my mental health improved. Everything Is interconnected (Neuro–Endo-Immune balance).